Talking to businesses about hazardous substances can be a difficult task. The topic is often too complex and detailed and it is hard to find a way to get the ball rolling. Johan Galster, a chemical engineer and inspector at the Environmental Department in the City of Copenhagen, found a way of dealing with hazardous substances. He shares his experiences on how to make the dangers of hazardous substances more understandable for people of all occupations and abilities.

Johan shared his stories in the international seminar ‘Reduction of hazardous substances from urban sources – strategies, tools and incentives municipalities can implement’, organised by the partners in the project Innovative management solutions for minimizing emissions of hazardous substances from urban areas in the Baltic Sea Region (NonHazCity).

No results until it was simplified

According to Johan, implementing environmental aspects in purchasing and construction in the City of Copenhagen (Denmark) was started around the year 2000. The city council expected the construction businesses and the city’s own employees to understand the rules easily and to implement them straight away.

The rules included the governmental “List of unwanted substances” which details 40 chemicals that government wanted to limit. Unfortunately, few of these chemicals had any relevance in the construction sector and even the chemical names were difficult to comprehend to non-chemists. As this basis was complicated and partly irrelevant the rules had no effect.

In 2016, new ‘Environmental Principles’ for construction were released. In this revision, it was decided to simplify the original list by defining 7 easily understood categories that were relevant in the construction and building sector. The approach is now called ‘Hit the Worst First’. 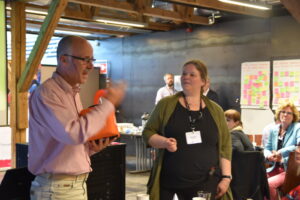 “In construction there are hundreds or even thousands of different chemicals. A few of them are quite dangerous; some of them are just problematic. My job has been to find and define the worst. We decided to temporarily accept the ones that are not so bad, because we can’t fight everything at the same time, so we started fighting the worst first. And that is a method you can use in other fields,” says Johan.

Once the rules were determined, they became a part of the procurement rules for construction and civil engineering. So if companies want to bid for a project in the city of Copenhagen, they have to live up to those rules.

“Of course, we have exceptions. If there are no relevant alternatives or the alternatives are unrealistically expensive or, for example, not as efficient, the engineers may choose an unwanted material, but it has to be mentioned in the spreadsheets. That means, that we will definitely ask for justifying arguments and only then decide if the unwanted chemical is allowed to be used,” Johan explains the main principles.

The same principle – ‘Hit the Worst First’ – was applied to another, totally different sector – hair dressing salons. Johan came up with idea of The Green Salon chain in Scandinavia. It’s a network that beauty salons join voluntarily. The salons agree not to use cosmetics or treatments with a number of chemicals, that are especially harmful. The salons are inspected and certified annually.

The Green Salon program has been implemented across Scandinavia and in several other countries over the last 12 years. It unites 65 salons, 250 hairdressers and thousands of clients.  It is the only certification scheme for safe and green hairdressers in the world. Thanks to this, the clients know exactly what they get in these salons.

“Research showed us that 60 percent of hairdressers suffer from reactions caused by chemicals they use in their work place. 80 percent of these hairdressers can now continue working as Green Salons hairdressers with almost no consequences. That is also due to the approach – Hit the Worst First: We have targeted a few, extremely dangerous chemicals, and that works. Of course, we would want to get rid of e.g. perfume., it is annoying but you don’t die because of it. In our evaluation the other chemicals are more important,” explains Johan.

In that program Green Salons use the “List of Green Salons Banned Chemicals” as basis. In addition to this, Green Salons include also other environmental aspects. On top of this, the Green Salon includes the education of hairdressers, annual inspections of salons and provides advice – not only to salons, but also to suppliers. In total, this is an example of positive dialogue.

Advice for any field would be – always Hit the Worst First. And have very good, clear scientific arguments.